The Hoi An Japanese Bridge

The graceful curve of an aging Japanese bridge is nothing short of pure art. Form, function, spiritual significance - people report feelings of peace just from crossing or hanging around the Zen-inspired bridges. Even Monet felt moved to create a masterpiece based upon the Japanese bridge.

Without question, the most famous Japanese bridge in Vietnam - if not all of Southeast Asia - is found in the historic riverside town of Hoi An.

Constructed sometime in the early 1600s, the Hoi An Japanese Bridge is a symbol of the town and a beautiful reminder of a time long ago.

A Little About Hoi An, Vietnam

With a close proximity to the South China Sea, Hoi An was an important trading port for Chinese, Dutch, Indian, and Japanese merchants up until the 17th century. Spice traders would retire to an upstairs eatery to enjoy local cao lau noodles while their wares were unloaded from ships below. The Japanese traders were the dominate force at the time; many of the old houses in Hoi An reflect their influence with a blend of both Chinese and Japanese architecture.

Today, the Hoi An Old Town is a UNESCO World Heritage Site and draws thousands of tourists who come to step back in time for a brief visit.

The Hoi An Japanese Bridge

The Hoi An Japanese Bridge remains a symbol of the significant impact that the Japanese had in the region. The bridge was originally constructed to connect the Japanese community with the Chinese quarter - separated by a small stream of water - as a symbolic gesture of peace.

Although his work has been appreciated for centuries, the builder of the bridge still remains anonymous.

Roughly 40 years after the Hoi An Japanese Bridge was constructed, the Japanese were demanded by the Tokugawa Shogunate to return home to Japan under order of Sakoku - officially closing Japan to the rest of the world.

Renovation of the Japanese Bridge in Hoi An

The Japanese bridge has undergone relatively few modifications over the centuries. The French removed thresholds and leveled the road across the bridge to support motorized vehicles during their colonization. The changes were later undone and the bridge pedestrianized again during major restoration in 1986.

The wooden sign at the entrance of the bridge was hung in the early 1700s, changing the name from "Japanese Covered Bridge" to "Bridge for Travelers from Afar". The Hoi An Japanese Bridge has been known by various names throughout the past including: Lai Vien Kieu "Pagoda in Japan"; Chua Cau "Covered Bridge"; and Cau Nhat Ban "Japanese Bridge".

Although the designer and original builders remain unknown, a new sign notes all the Chinese and Vietnamese people which were involved with restoration work.

Shrines in the Japanese Bridge

The small shrine inside of the Hoi An Japanese Bridge pays tribute to the northern deity Tran Vo Bac De who reputedly controls the weather - an important thing considering the seafaring traditions and notoriously poor weather around Hoi An. 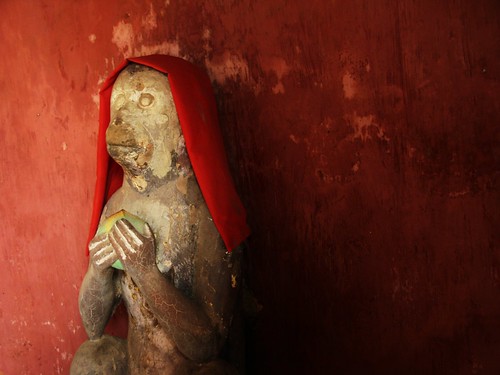 Visiting the Hoi An Japanese Bridge

The Hoi An Japanese Bridge crosses a small canal on the west end of the Old Town, connecting Nguyen Thi Minh Khai Street to Tran Phu Street - the main thoroughfare along the river. Art galleries and cafes line both sides of the peaceful street beyond.

Although anyone can photograph the bridge, crossing the Hoi An Japanese Bridge requires a coupon included in the entry fee ($4.50) for Hoi An's Old Town attractions. A lack of coupon isn't always a problem for crossing the bridge; tickets are rarely checked.