In this post, I will discuss the Vietnam War from various perspectives. I will also be showing pictures where battles have taken place. As I mentioned in the first post about Vietnam, please do not read this post, if you feel this will cause any type of ill feeling. Mark and I, as well as the kids, learned a great deal during this tour; I hope all of our readers learn something as well...

We have had several friends go to Vietnam prior to us and they have all recommended the Jack Tran Hoi An Eco tours, so we signed up too. We selected the 4-hour fishing tour, as the longer 6-hour tour required some bicycling on the road and through rice fields, which we didn't think our kids would handle well. In full disclosure, I was scared I would be clipped by a van/taxi/motorbike while riding a bike as well, as traffic laws are merely a suggestion of safety vs. strictly enforced at this time. So, no biking for us!

Our van picked us up at the resort around 8:30 a.m.(with none-other than Jack Tran himself) and we were off for the 30 minute drive to the boat. Jack was kind enough to allow me to play tour-guide and ride in the front seat with his driver so I wouldn't get motion sick before our adventure even began. We had a total of 14 tourists on our boat plus the 4 or 5 employees, although the boat could hold around 30 tourists, so it was quite large. While we were waiting to depart, Jack explained that this was his family business. His father was our "Captain" and his brother-in-law also worked on the boat. Jack began the business because his family needed a safer income than fishing. He explained that his father was in his 70's and had been a fisherman for many years, however, he had several dangerous "close" calls with the seas. They started this business about 7 years ago and now it has grown quite successfully and he has purchased more boats and expanded the types of tours they offer. Throughout the tour, we could really tell they all had a passion for what they do and they genuinely enjoyed their jobs.

While we were driving out to the bay, we were all allowed to pose at the Captain's wheel. 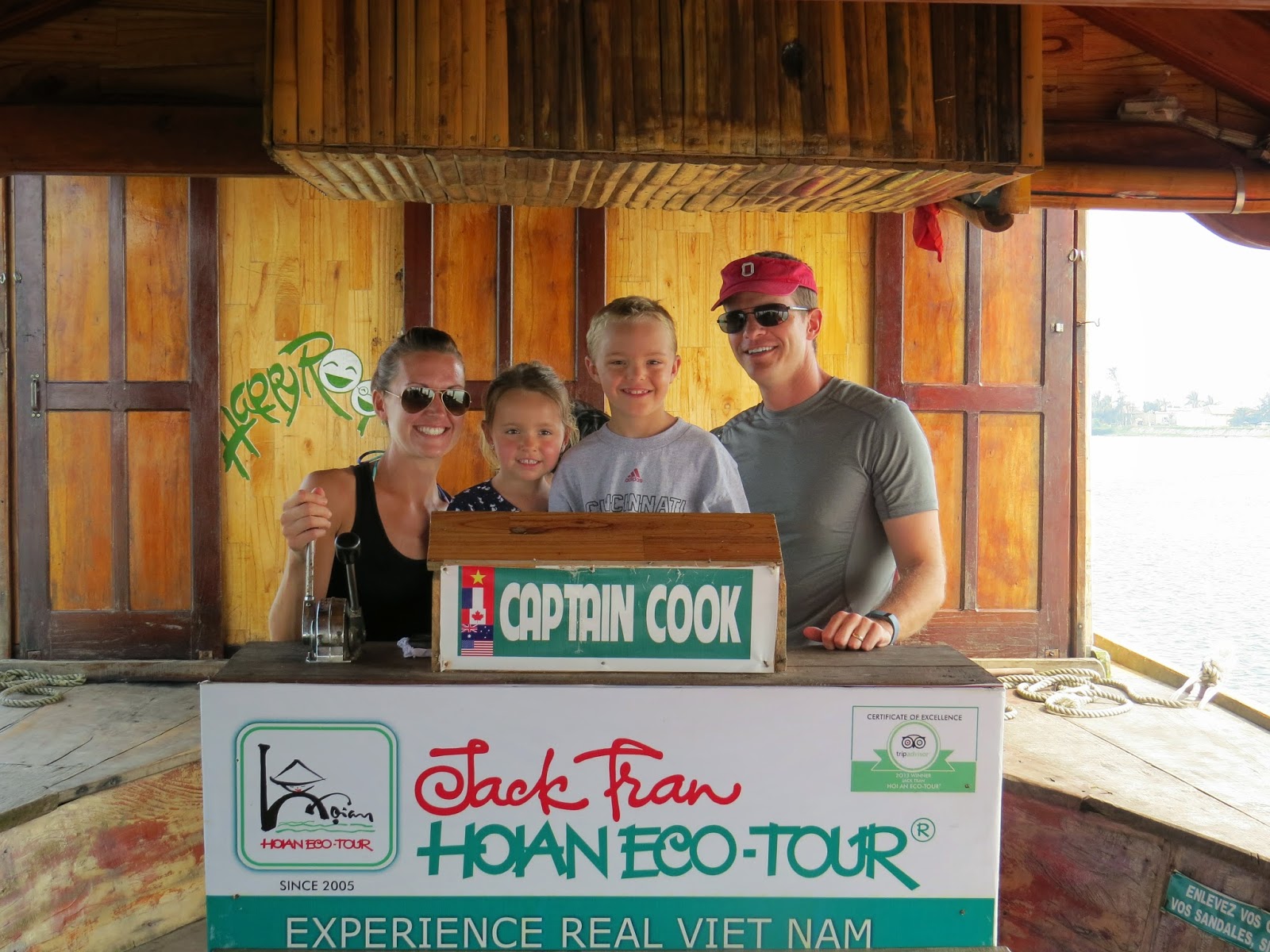 Jack then began talking briefly about his village where he grew up and continues to live, Phuoc hai. This village was occupied by American troops during the war. Although Jack himself was not born yet, his parents and aunts/uncles were all affected. He did have family members that fought in the war. He shared that much of his village was destroyed in the battles. However, as you can see in the following pictures, it is built back up now. It remains a quiet fishing village, much as it was before the war. He also spoke very candidly of the opinions of his family, some villagers, and himself and I am going to briefly explain what we took away from his discussion with us...the war brought much devastation to Vietnam, many people suffered immensley, many lives were lost, people lost everything they possessed. The country was devastated for a very long time and there were a lot of hard feelings for America/Americans... However, in 1986, the Vietnam government moved toward a socialist-oriented market vs. the previous communist-government controlled economy. This allowed Vietnam to grow and begin to recover and move beyond the war. Had history not happened the way it did, who knows what state Vietnam would currently be in. Slowly, the economy has taken off, and tourism has increased dramatically. Tourism now has helped to rebuild Vietnam and employs many people. However, the new problem for the Vietnamese people is that with tourism (massive construction built for tourism such as golf courses, resorts, etc.), they are facing a loss of the culture and heritage that has been a source of great pride. However, given the other option, tourism is a good thing...

I would like to mention here, like anywhere we travel in Asia, people (locals) are always asking where we are from. Not once has anyone said anything negative toward us or given us a "bad look". We have received only smiles and sometimes questions. We also have been told many stories about how this one person they knew went to America, or they have a family member living in America, or they want to vacation there one day.

Background on the Vietnam War:

I wanted to provide some historical facts and background for anyone interested in more about the Vietnam War (or Vietnam call it "the American War"): The war spanned the years of 1954-1975. At this time, there was a North Vietnam (a communist mindset) and South Vietnam (more democratic). The Northern Vietnam forces had just defeated the French colonial administration and they wanted to unify the North & South into a one-communist nation. The French had previously claimed Vietnam as a colony after aquiring the region during the First Indochina War during the years of 1946-1954. The United States fought with the Republic of South Vietnam, Australis, New Zealand, Republic of Korea, and Thailand against "Viet Cong" which consisted of South Vietnamese guerrillas, regular military forces, and the Northern Vietnamese Army. The United States was heavily involved during the years of 1965-1968, having the largest military presence of all involved during this time. This war had a huge human cost across all nationalities: estimates are 58,220 Americans, 800,000-3million Vietnamese, 200,000-300,000 Cambodians, 20,000-200,000 Laotians, as well as many from Australia, NZ, S. Korea, and Thailand (wikipedia, historynet.com, and news.bbc.co.uk accessed 7/10/14)

The next four photos are of the village Phuoc Hai. 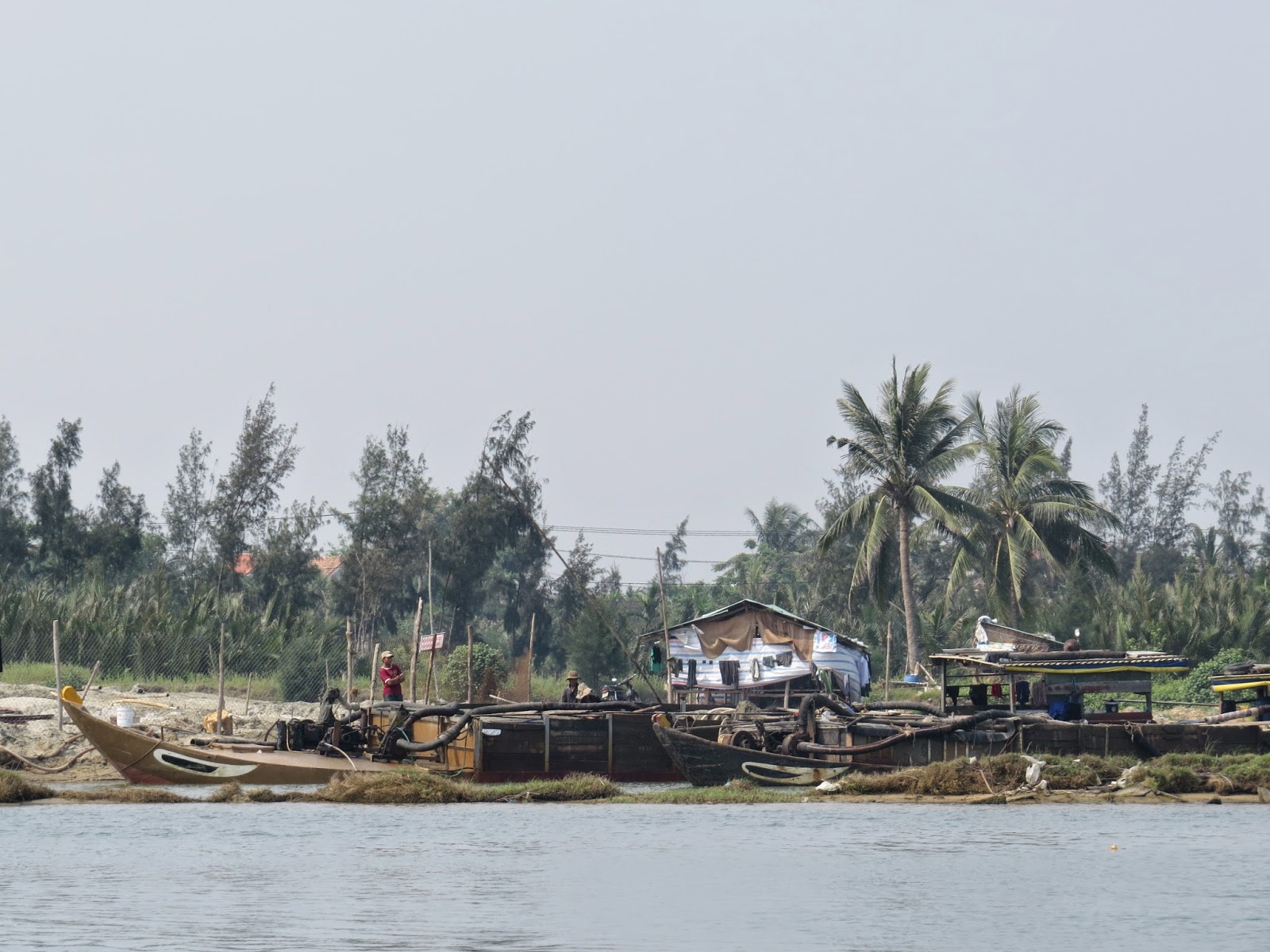 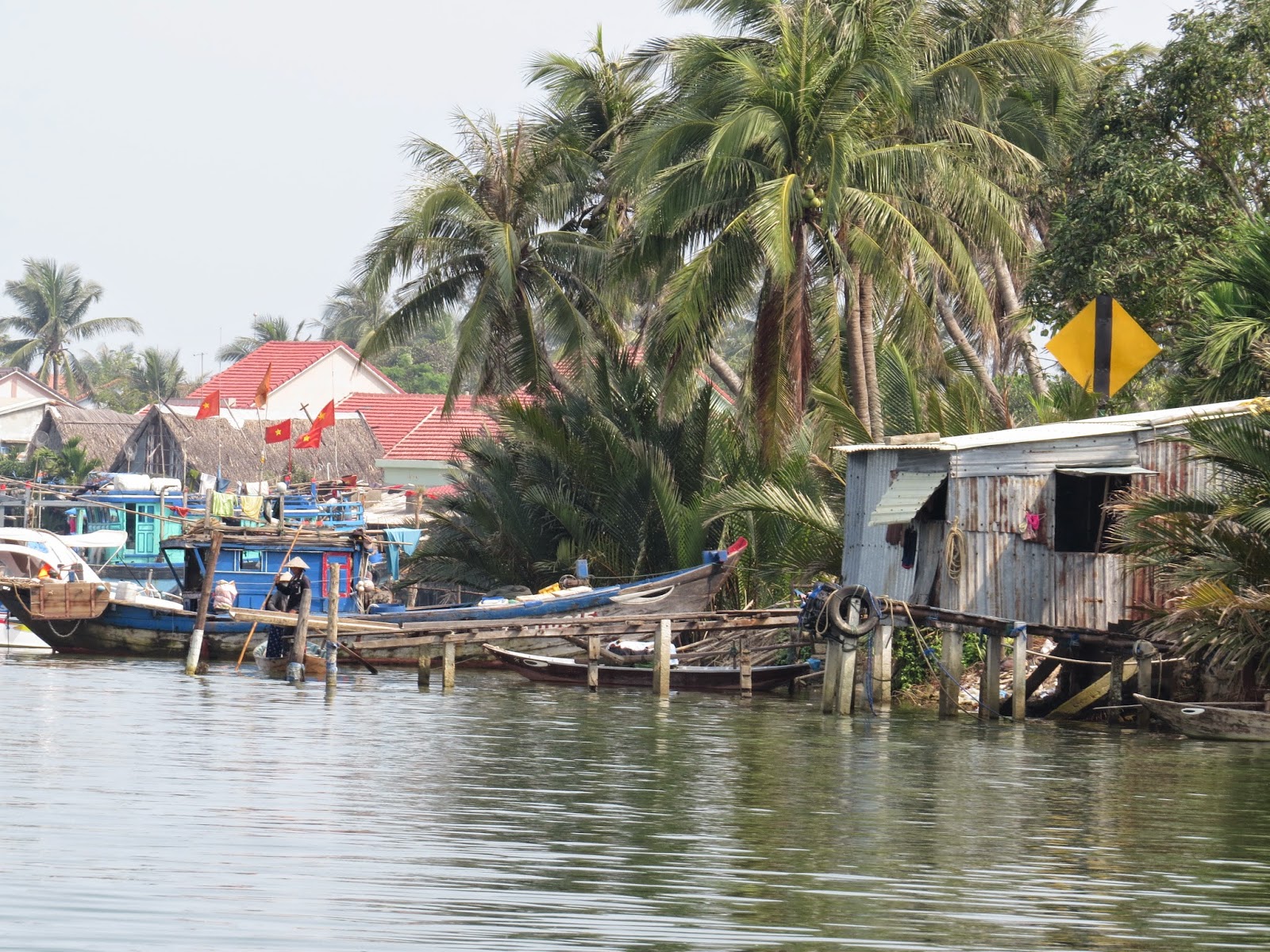 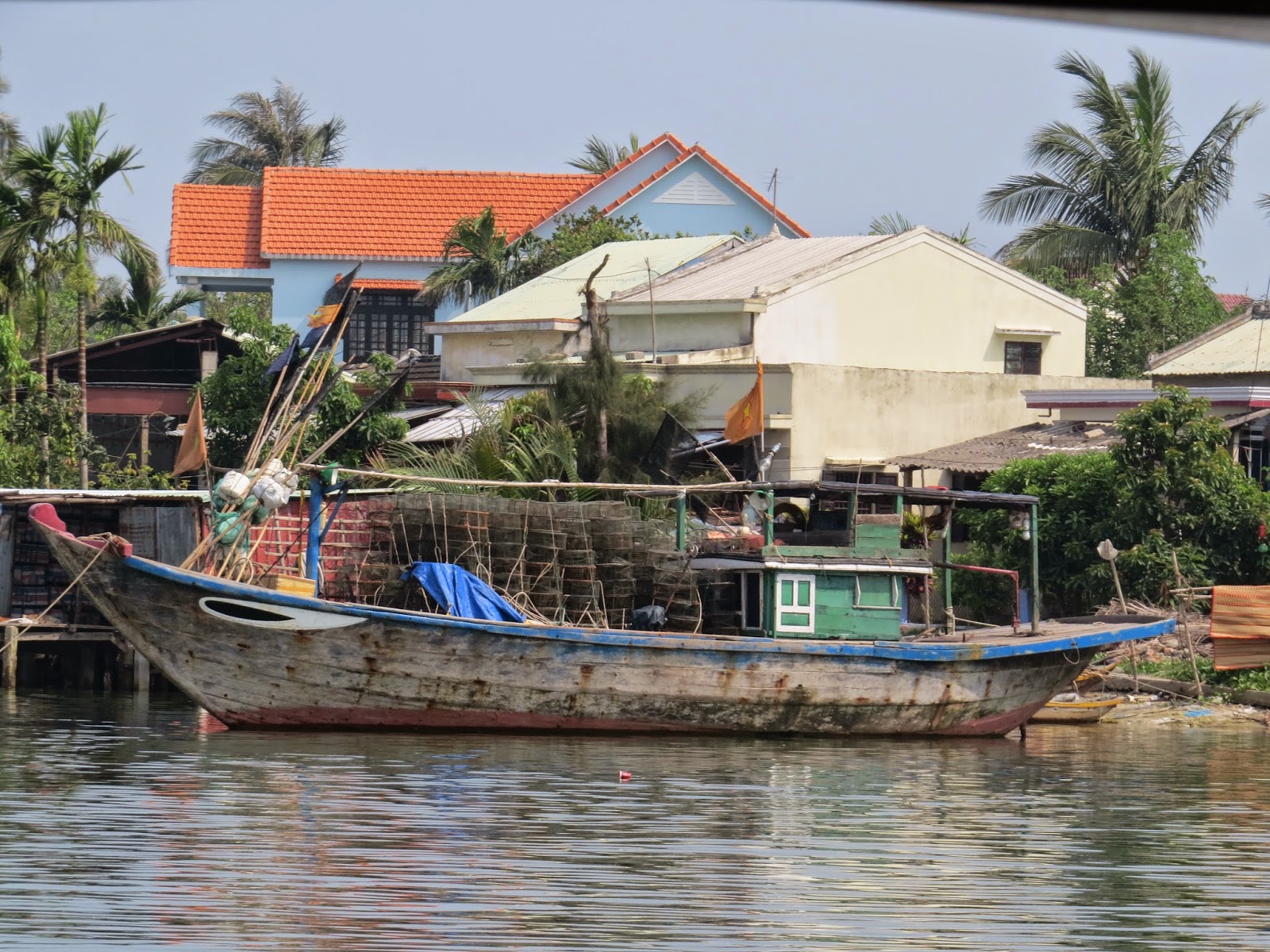 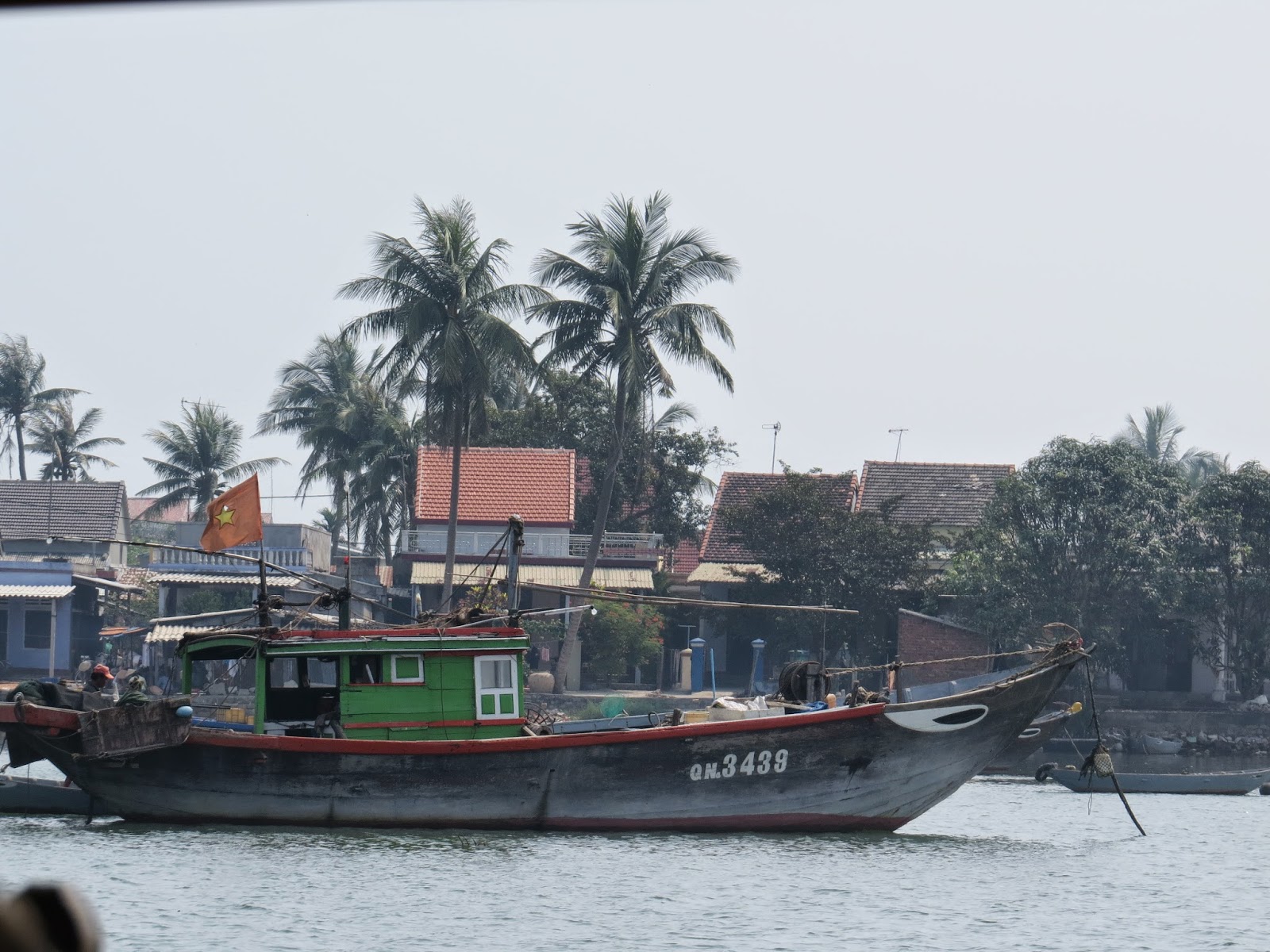 Following our introduction, we boated over into the bay to climb aboard our fishing boats. There were two elderly couples, each occupying a boat a bit larger than a canoe. We split into the boats and were taught how to cast the nets. The nets are actually quite heavy due to their size and weigths at the bottom. Plus it is a bit dangerous as there are metal bits and other debri that can cut oneself. It was a very physical process and to think that the Vietnamese fisherman do this day in and out until their health fails is very eye opening. Anyways, the kids caught a few oysters and a shrimp, I caught oysters and a jellyfish, Mark caught seaweed. The Jack Tran crew on our tour boat kept my camera and took tons of pictures to document our experiences. 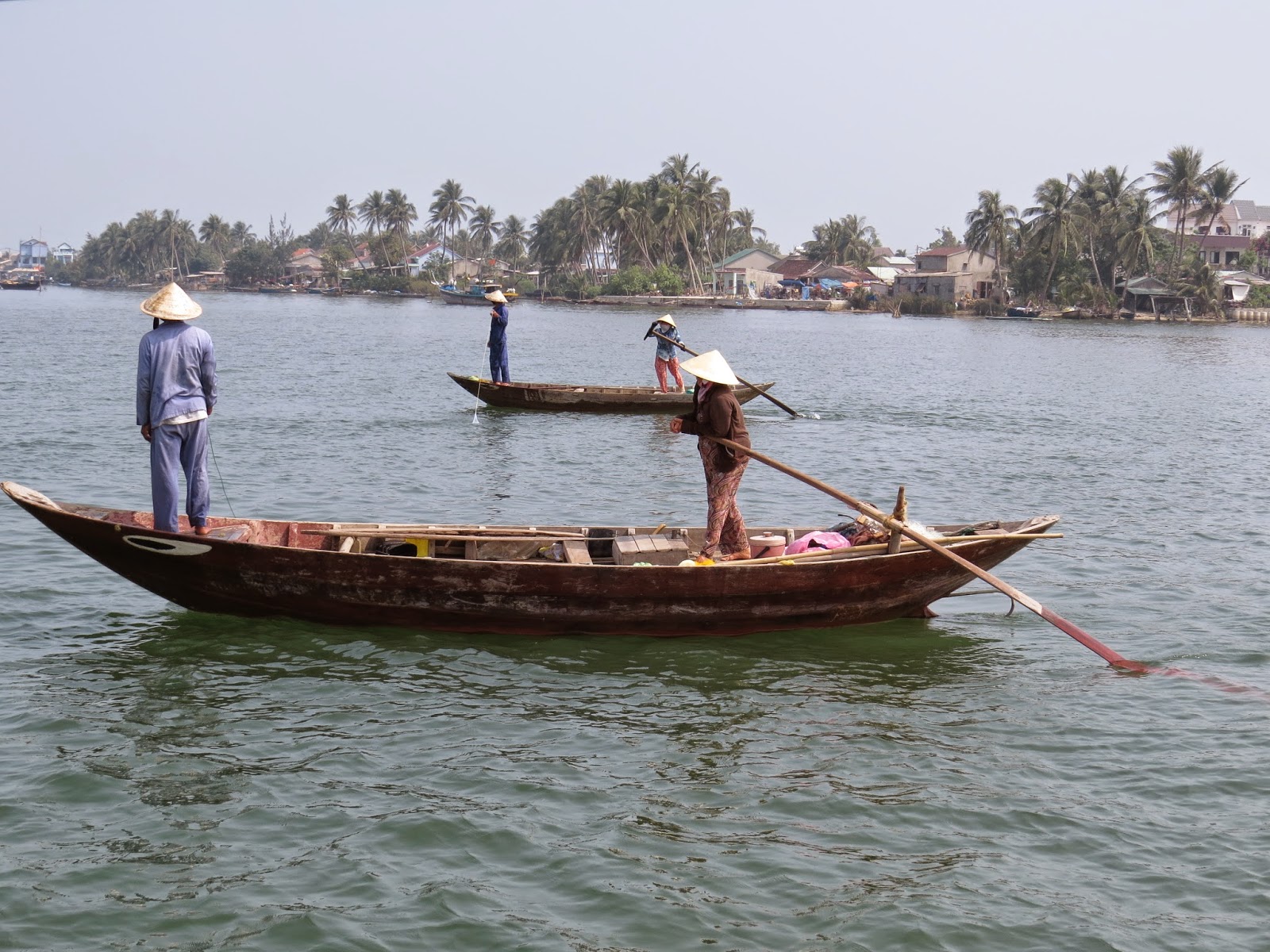 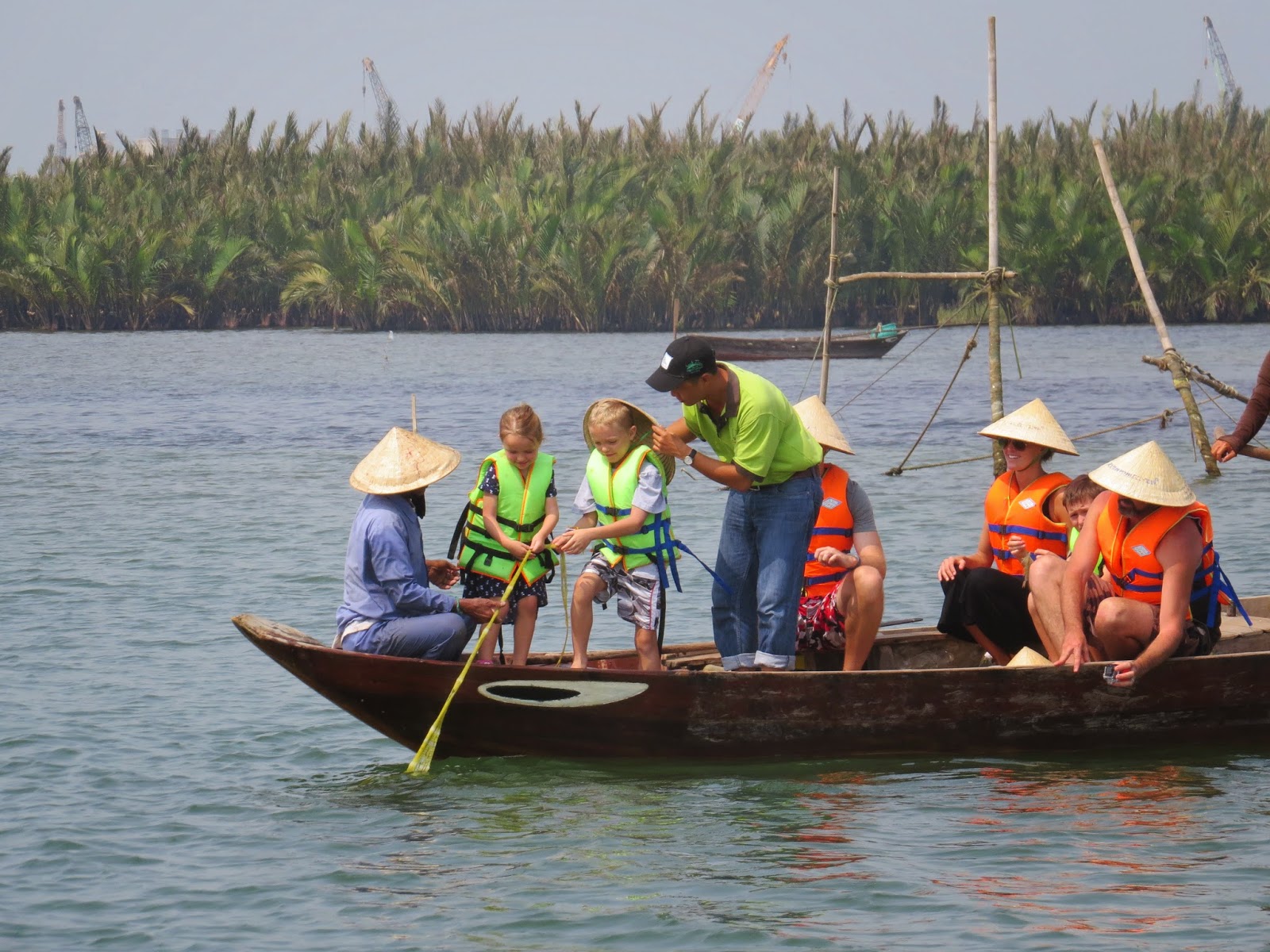 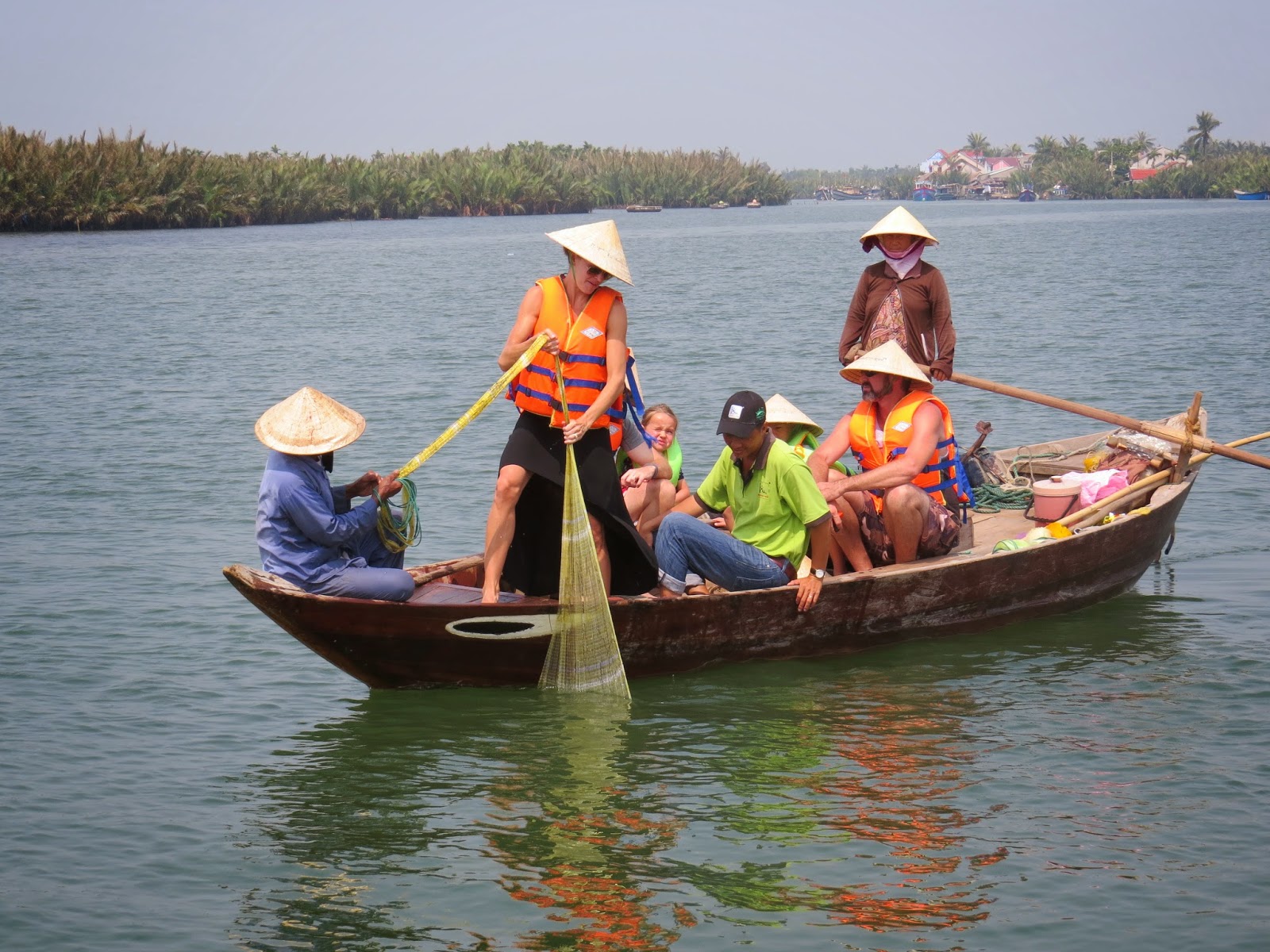 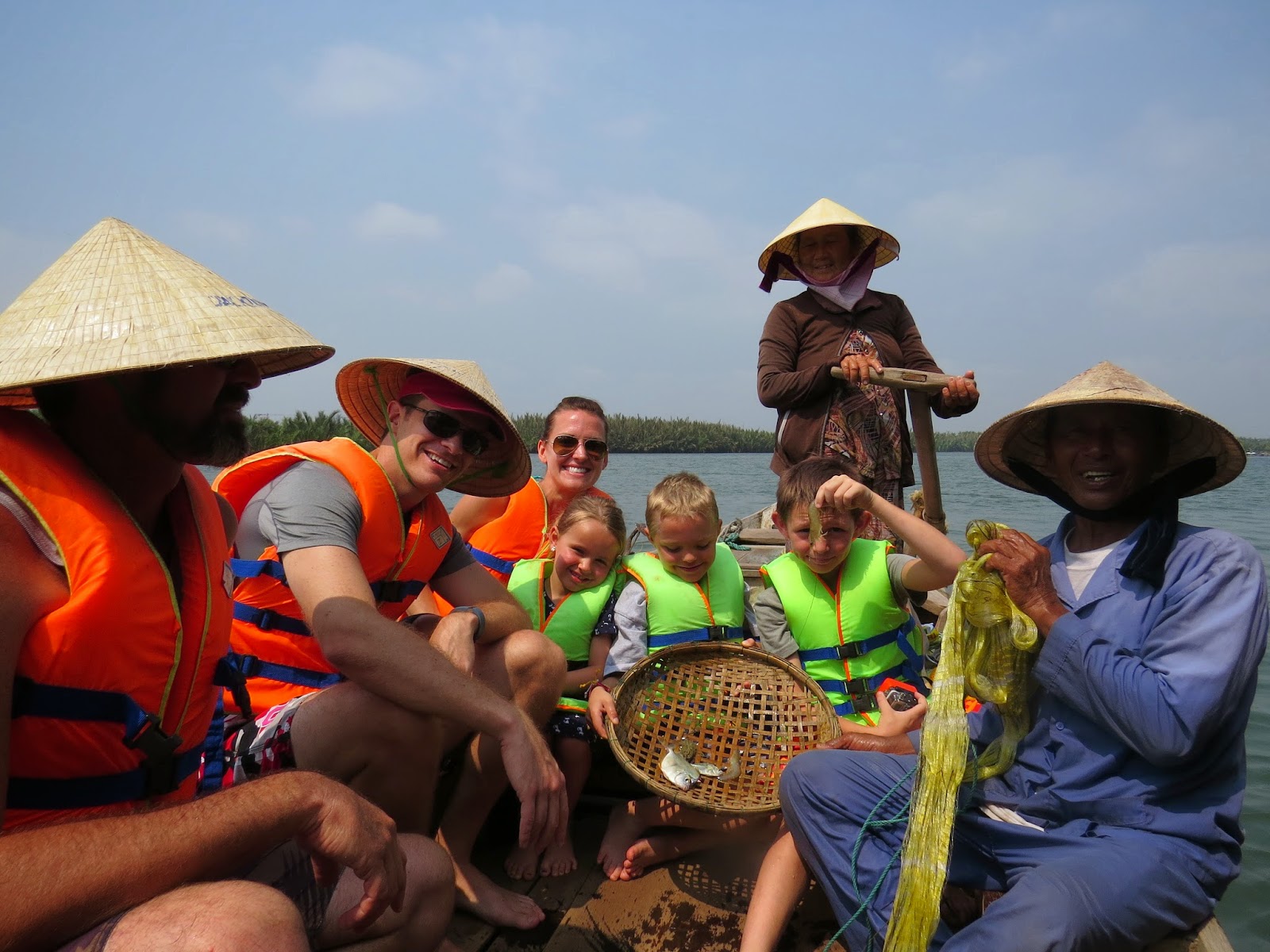 The other father and son in our boat actually caught a bit bigger fish, so they let our kids hold it for pictures :)

Next, we headed over to the bamboo basket boats for our jungle tour. These boats came with a crew as well. They met our tour boat and did an introductory dance to "Gangham Style"- of course the kids loved this! These boats are apparantly very sturdy and bouyant, these guys basically had the boats tipped onto the edge without flipping over. We climbed in and I was given an oar to paddle while our driver made cute little animals, sunglasses, hats, and other jewlery out of the bamboo leaves. Unfortunatly, steering a circular boat is not as easy as it appears, and our guide had to eventually take over that job while he continued to make things for the kids at the same time!

So this jungle is probably what you may have seen dipicted in textbooks, on movies, and television, or at least a good representation. This particular jungle is right across from the village I was talking about earlier and was occupied by Viet Cong. Bamboo grows very quickly so every so many years, it is cut down. This growth is around 5 years old, I think, but don't quote me on that! Jack had explained to us that Viet Cong soldiers would submerge themselves under the shallow water, which was anywhere from 12-36 inches or so, and breath throw straws while waiting to attack enemies (Americans and the allied forces). The bamboo vegetation is quite thick and he explained the canals were very difficult for the inexperienced soldiers to navigate. He shared that many lives were lost in these jungles as the submerged soldiers would then throw grenades under the boats of the Americans and allied forces. It was a very surreal experience to go through the jungle knowing the significance of it in our history. However, a very educational experience and one I don't think we will forget. 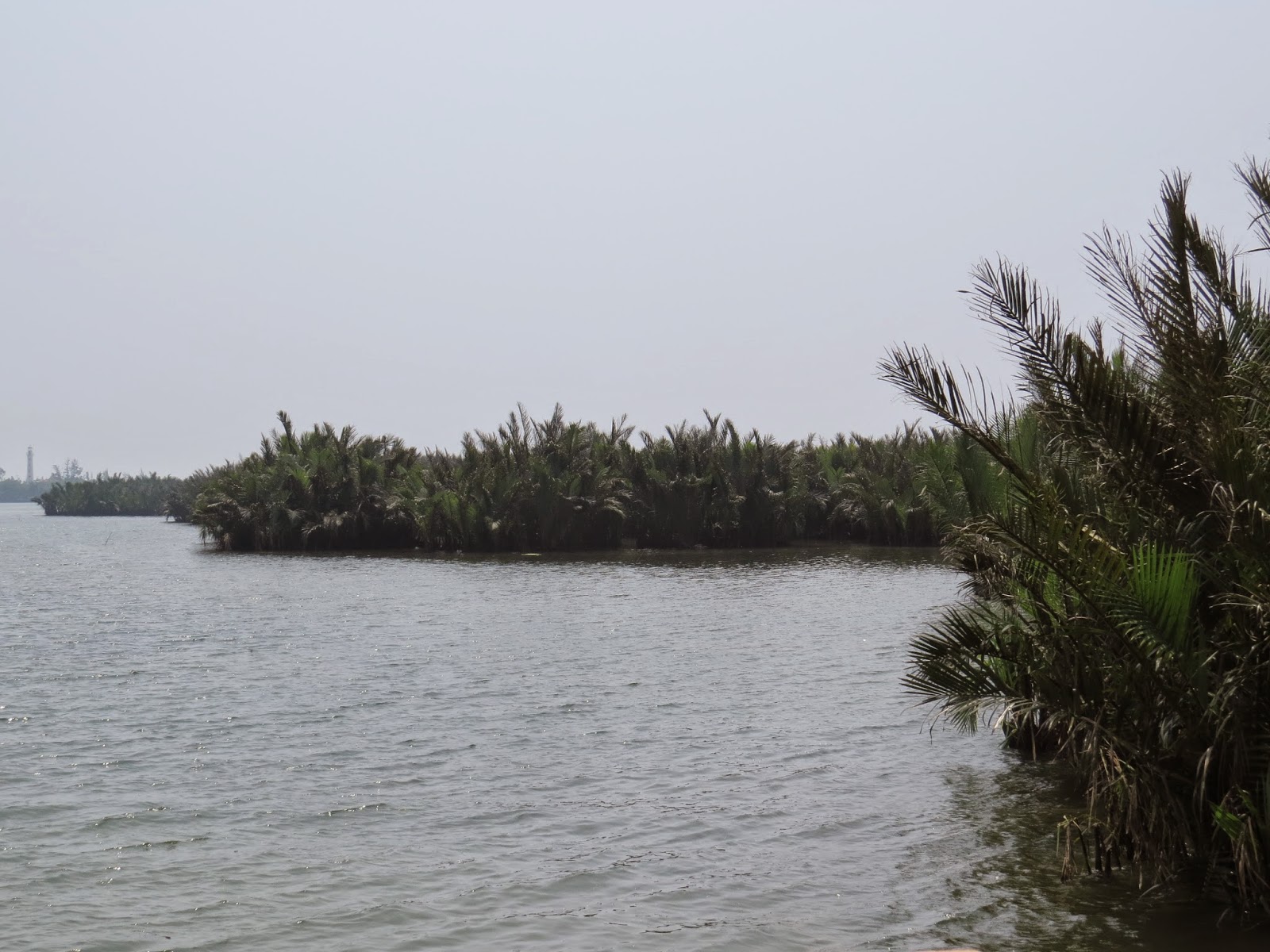 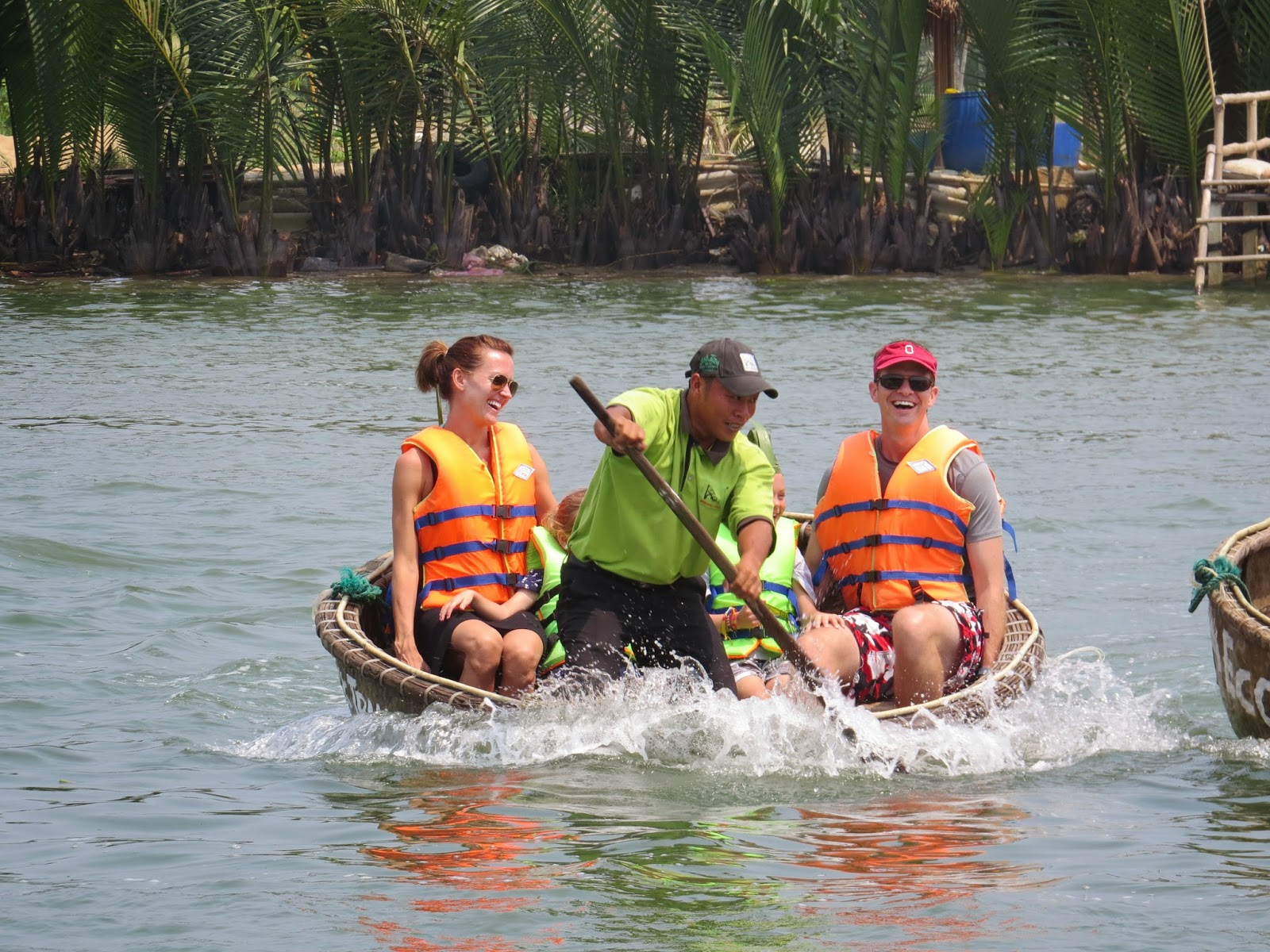 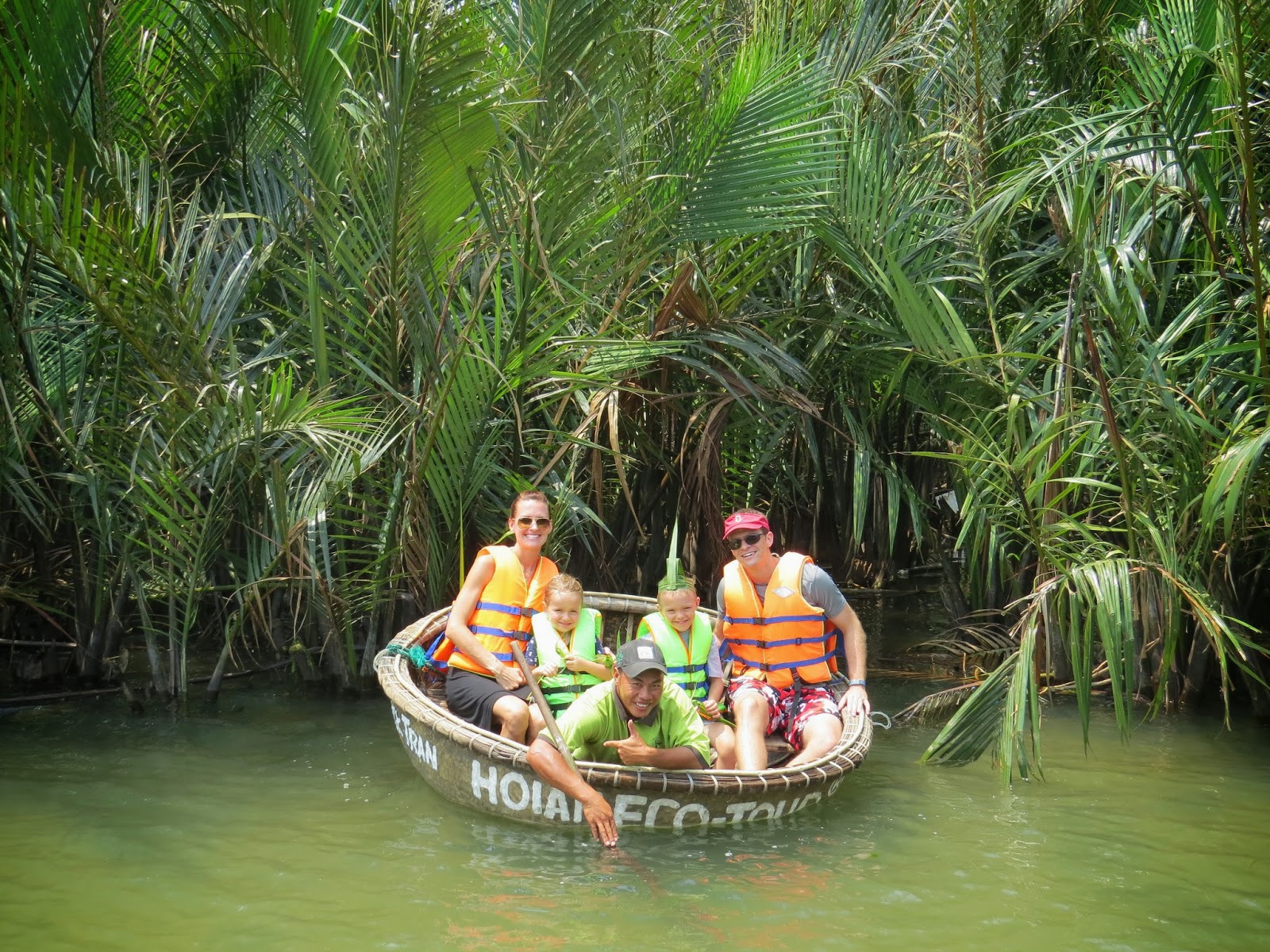 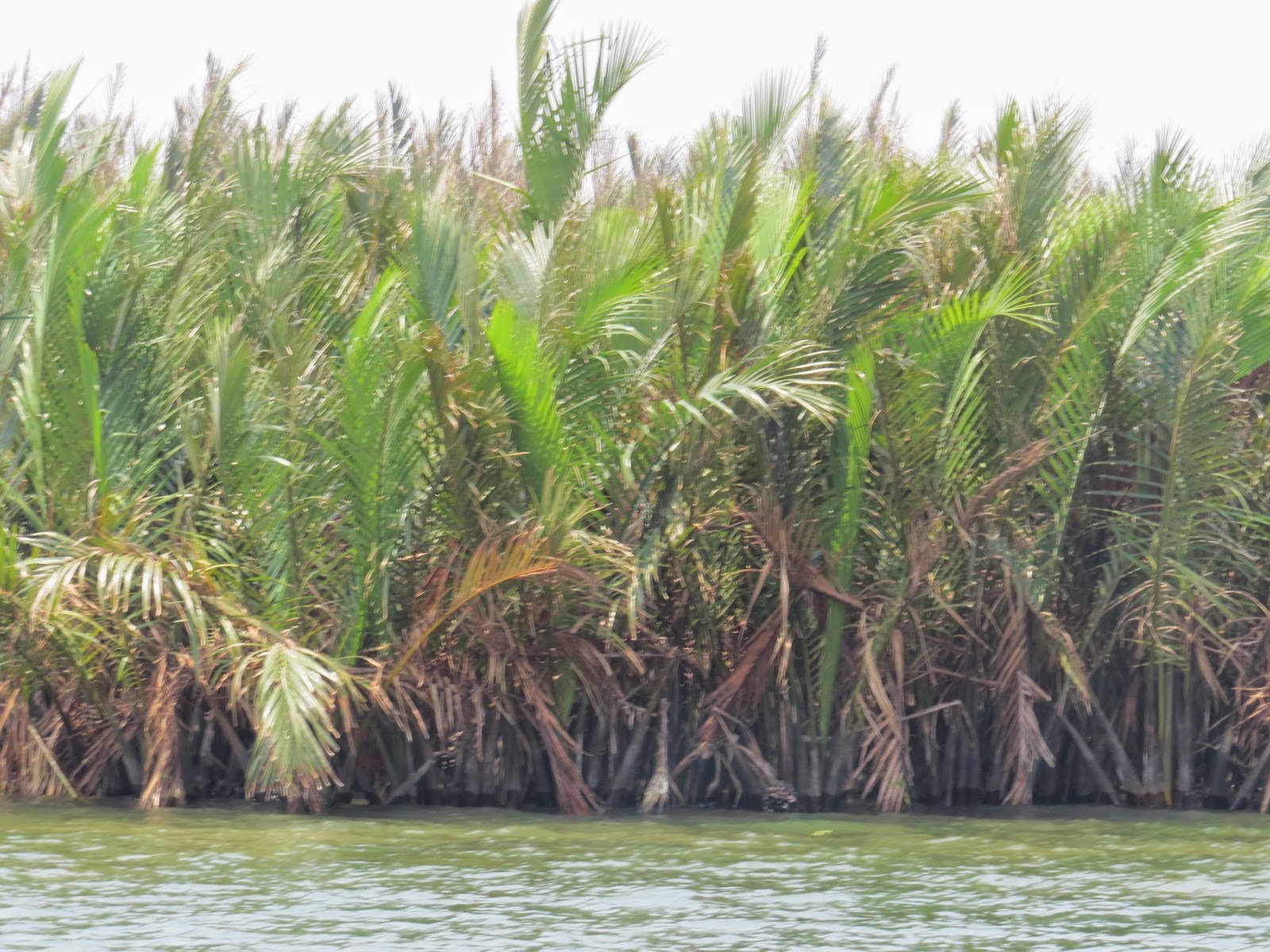 A little side note about the bamboo basket boats. I noticed I had some black sticky stuff on the bottom of my feet because we had to go bare foot into the boats. It was then explained to us that buffalo dung is the "glue" that holds the woven bamboo together and makes it water tight. Apparently this stuff is like cement when it dries. It took about 30 minutes, a butter knife, soap, and eye make-up remover to get that stuff off my feet, I lost about 5 layers of skin I believe. Somehow, I was the only lucky one with this problem...

We then headed over to a beach area where the fishing couple lived to meet for tea and to practise our net casting skills once more. This time they provided us with different sized nets based on our ability to handle weight. You can see in the one picture of me that there is actually a specific way to wind the net around your arms and you must keep your body frame in the right direction or you cast yourself with the net or risk losing a finger or something. The kids actually had a pretty good handle on it though! They thought it was easier to do on land than having to balance on the boat.

During the tea with our fishing couple, Jack answered and questions we might have had. The kids ran around and pumped water from their well, chased some chickens around, and played on the beach. The couple had made us a traditional hot tea with various herbs, which were quite strong. Carson was brave and graciously accepted his cup and drank it but Evie was not so easy going about the situation. Lucky dad had 2 cups :)

The final picture is everyone in our group preparing to have our fishing feast! The crew was busy preparing our meal during tea time. We had various steamed fish, vegetable, a type of omlete, rice, noodles, biscuits, and chicken. Everything was amazing! However, if you know us, you know our kids' can't eat many of those things, so Jack had prepared special food for them, which was really above and beyond!

We truly had an amazing day and I hope everyone can take a little something away from this experience. 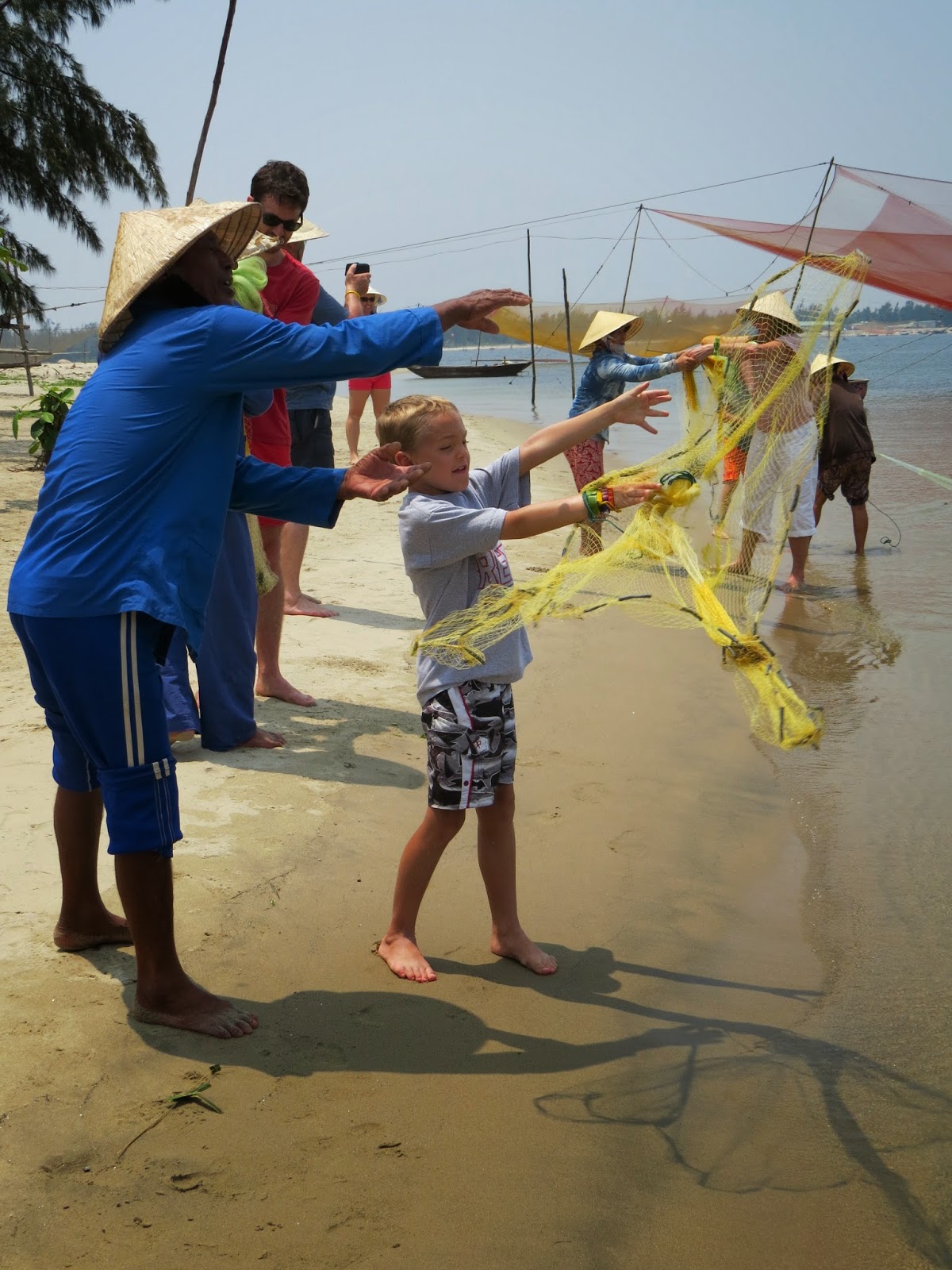 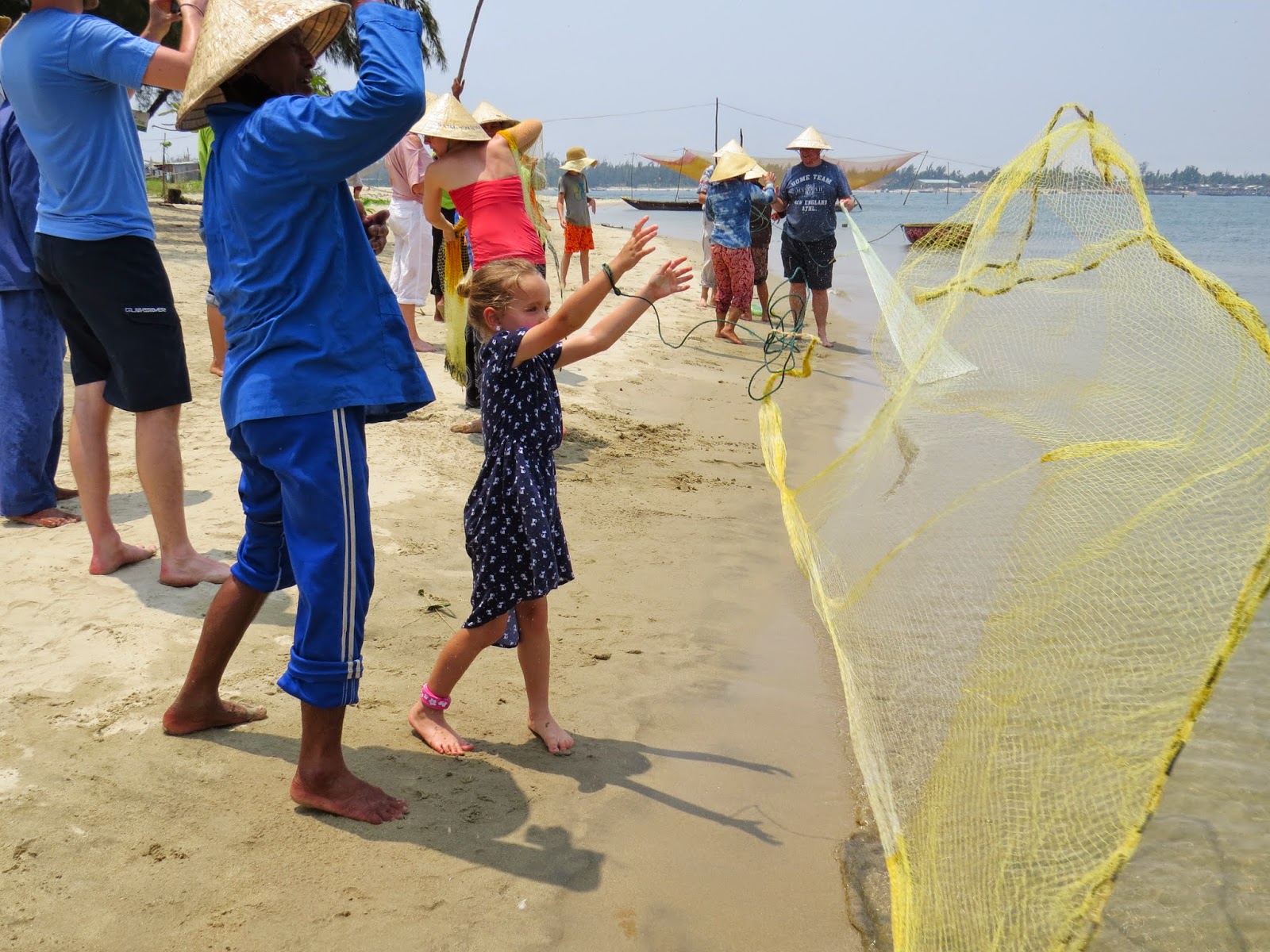 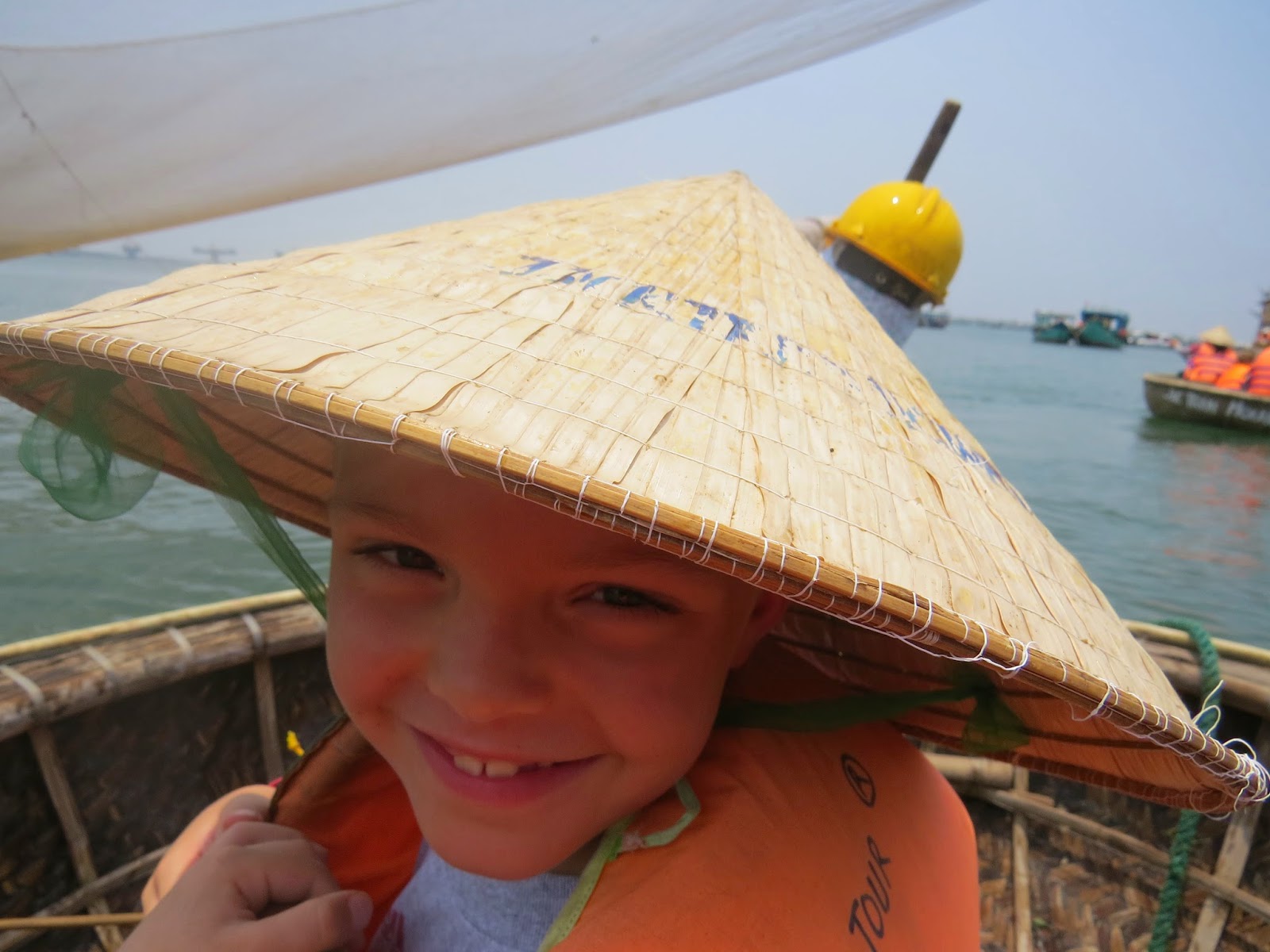 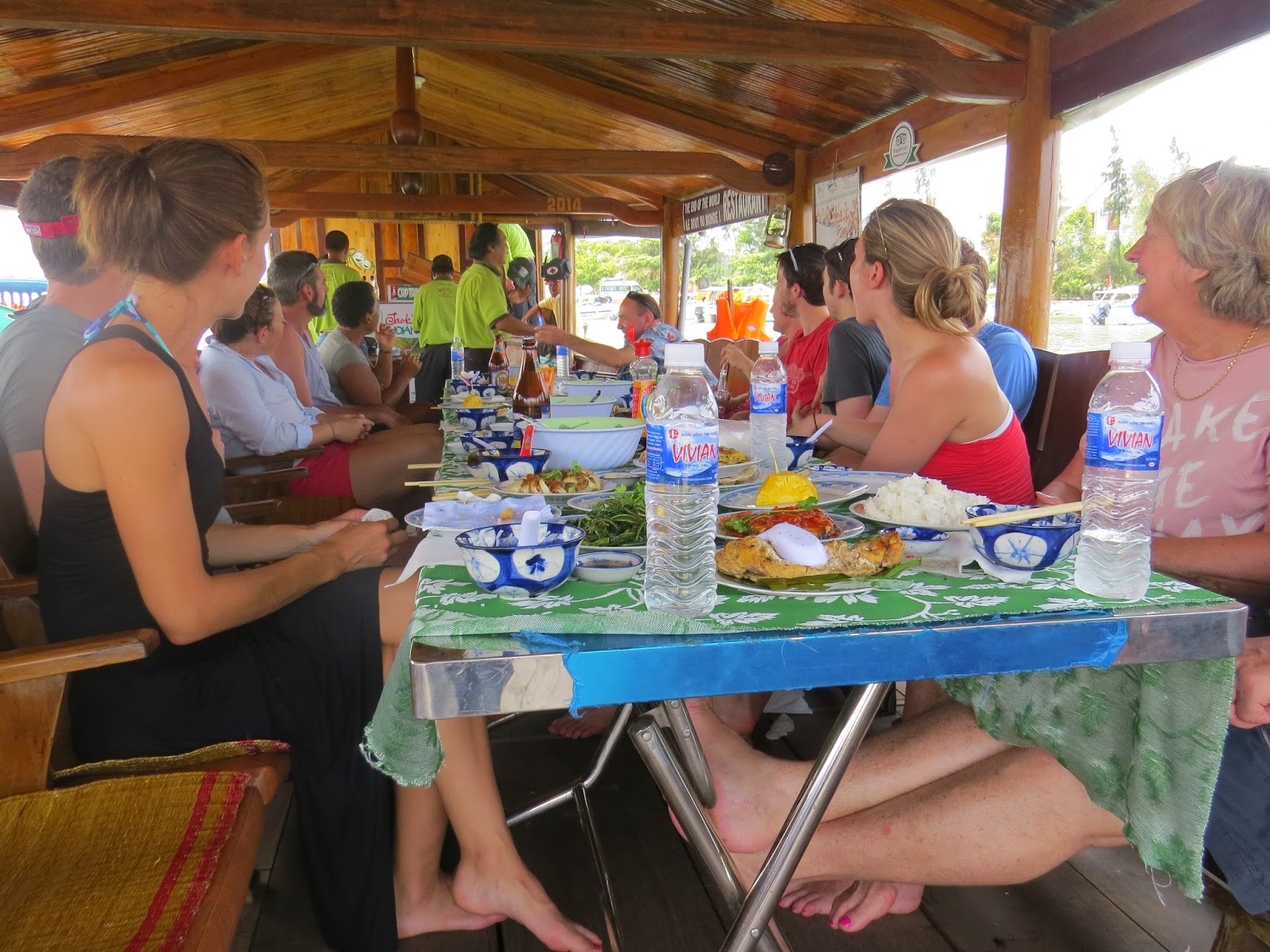 (Source from billsfamilyabroad.blogspot.com by Jennifer Bills)